A day spent with forester Caspar Sandgren in the County of Halland in southern Sweden shows Skagerak’s owner and CEO Jesper Panduro how to turn his dream into reality.

To Caspar Sandgren, the 515 hectares of forest he runs in the County of Halland in southern Sweden is like a large extended garden. The forester knows every incline and rocky outcrop of the land he actively took over 17 years ago. Since then he’s planted every tree and talks about caring for the young spruces until they can fend for themselves as if they were children. His relationship with this forested land is primal but also pragmatic. He’s running a productive business that his family lives off, albeit one with a 50-year cycle of life and death.

“It’s in your blood, which is kind of strange because you have to make business decisions that you can’t gain anything from for 50 years, from when you plant the little tree until it’s ready to harvest. It’s hard when you have to harvest. When you do a clear fell it changes the landscape but still it is the cycle and it has to be done,” he says.

Sandgren grew up on the land his brewer grandfather bought in the 1930s on the outskirts of Åkulla, one of Sweden’s foremost beech forest areas dotted with lakes and nature reserves. After almost two decades away as a chiropractor, he returned fulltime in 2005. Every day since then, irrespective of how long or how arduous, he’s felt contentment and freedom.

Ten years ago he and wife Anna bought Rörbäck Forest, to preserve its 40 hectares of mature forest, acquiring a farm that had been uninhabited for two decades. On the site of the old farm they created a retreat to give people a chance to experience the forest and its surroundings as they know it. (Read Rörbäck stories part Il / An Architectural and Natural Wonder in Sweden)

On this day in early fall Sandgren is sharing his insights with Jesper Panduro, the CEO and owner of Skagerak. Skagerak has bought 40 hectares of land in Denmark for a forest and is keen to learn about forestry firsthand. “Initially my idea was to have a forest that nobody touched, it was kind of romantic, but then I learned you could be more active,” says Panduro. “So, we want to go for all three – climate and carbon capture, biodiversity and a recreational area open for people to walk in – but also run it as a business for the next generation.”

Sandgren is proof that such ambitions are not diametrically opposed. “What you say about the goals, none is contra to the other one, carbon capture and recreation go together, biodiversity and then maybe have some production as well,” he tells Panduro, advising patience. “You asked me what I have learned, one is to realize that everything takes time especially when you do it with forests.”

Later they walk in an area Sandgren calls the ‘quarry’, a stand of mature beech, spruce, birch and pine trees most likely planted around 1910 when Rörbäck was reforested. It is awe inspiring and evocative, shafts of light filter through the canopy and there are huge chunks of stone covered with luminous green moss. The massive stones have flat sides and markings showing they were split at some stage, probably the mid 19th century, and left there, to speak of the passing of time.

“Initially my idea was to have a forest that nobody touched, it was kind of romantic, but then I learned you could be more active.”

“This is my dream,” says Panduro. He’s standing under a 20 to 25-metre-tall beech tree with a three-pronged trunk like a candelabra which Sandgren says is an eternity tree. It’s one that won’t be cut down and will one day harbor mosses and lichens that don’t start developing until a tree is more than 120 years old. Swedish forestry law requires the preservation of certain ‘eternity’ trees or groups of trees of a cultural or natural value in a productive forest and this is a majestic specimen. Enough to send Panduro into a reverie. He loves just being in the forest, soaking up the sounds and the smells, seeing the stages of growth and differing densities.

Hearing Sandgren talk about the joys of doing the manual work, planting the trees in spring and creating a forest that someone else will harvest in 50 years’ time, has given him a path to follow. “It makes me so happy to be here,” says Panduro. “It’s a constant living organism, we talk about slow design and this is like slow farming. You have to respect it and do what needs to be done and you won’t even be there to see it develop fully.”

AN ARCHITECTURAL AND NATURAL WONDER IN SWEDEN / Rörbäck Part II / 2021 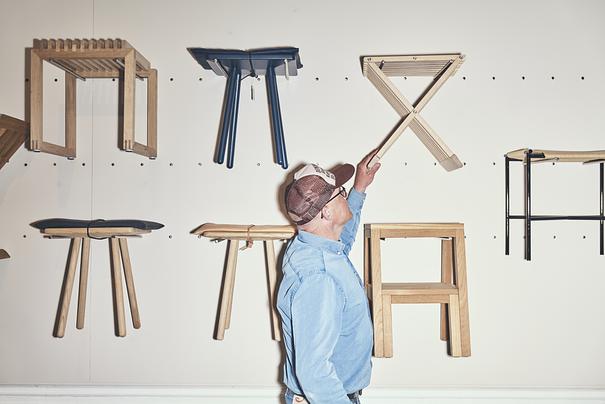 SUSTAINABILITY IS A NATURAL CHOICE / 2020

At Skagerak, sustainability runs through our veins and lives in our hearts. For the past fifteen years, we have actively sought a sustainable path, and we genuinely believe that we can make the world a better place if we try harder – together.